As Amit puts it, the only time an active Twitter user don’t tweet is when they are sleeping. Going with this logic, you can easily deduce the time a Twitter user going to bed, by analyzing the period of time where their Twitter profile activity is at the lowest.

Even if he is not tweeting much, but as time goes (and his tweets number builds up), the data provided would still be sufficient to give some insight on his sleeping time.

SleepingTime.org uses this logic to reveal the sleeping time of any Twitter user at your choice. Simply enter their username (or yours) and SleepingTime will display the results, like this: 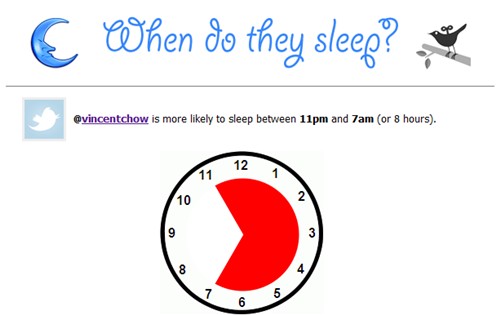 For some reason it’s just not showing my Twitter avatar, but that does not matter because the estimated sleeping and waking time is exactly the time I usually sleep (okay, forget about the few minutes snooze).

Check it out, and if your estimated sleeping time is not at all accurate, you can let Amit know so that he can fine tune his algorithm.