To a software developer, tech blogger or a software reviewer, screencast can be very helpful in demonstrating a software feature or even a tutorial. No amount of words can give a better picture than an animated demonstration captured using a screencasting software.

However, for a short screencast lasting just for several seconds, it is not worth the hassle to upload it on YouTube or Blip.tv, then embed it and require viewer to click on the “Play” button. A better choice is to convert the video into an animated .gif.

Unfortunately, most screencasting softwares that has the feature of converting a screencast into an animated .gif file are commercial softwares. Converting it manually using image editing software can be too complicated and time consuming.

This is where Movie to Animated GIF Converter by Evan steps in. It is a freeware that does nothing more than converting a AVI (most screencast are captured in .avi format) or a MPEG video file into an animated GIF image. 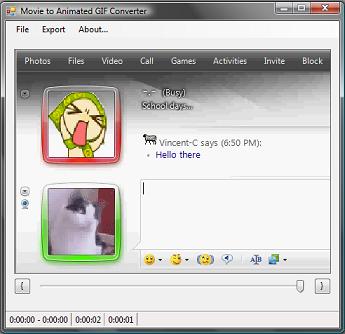 Only 3 steps are required to do the conversion, which is:

You may choose to export the animated GIF in its original size or resize it to 50% smaller.

The good news is Movie to Animated GIF Converter is free and very small in size â€” with no installation required. Simply download the MovToGif.zip (81.0 kb) file, unzip it, open the .exe file and you are good to go.

I’ve captured a demonstration of the animated display picture feature in Windows Live Messenger 2009 using the free CamStudio, and then converted it into a .gif.