A quick review of the homescreen and multitasking capability on Nokia E7.

Coming from iOS, I would welcome any homescreens that allows the slightest amount of customization. On Symbian^3, there are 3 homescreens which can be customized with 6 widgets each.

With the widgets, you can display live information on the homescreen such as your latest emails, social network feeds and your phone’s notifications. You can also use the widgets to create shortcut icons to your favorite apps or contacts, and also shortcuts to phone functions like Wi-Fi toggle and music player. The downside is that the shape and size of the 6 rectangular widgets is fixed. Want to view more emails at a glance? No you can’t. Only 2 email subjects can fit into the small widget, live with it.

There are two ways to switch home screens, by either swiping across the screen or using the button with dots at the bottom of the screen. Either way, there will be a slight artificial lag between home screen switching.

Somehow the Symbian developers decides that a slight lag is the most elegant “theme effect”. You can turn it off at:
Settings > Themes > General > Options > Theme effects > Off

All the three home screens can be customized by different wallpapers.

Multitasking is definitely not a new feature on Symbian. It works flawlessly even on my first and second Symbian device, the Samsung i550w and Nokia N82. Symbian^3 takes multitasking a notch higher by introducing screenshot thumbnails of all opened apps. 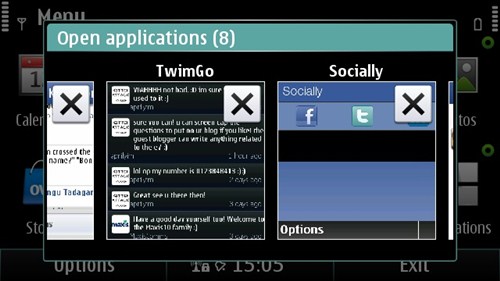 In this test, I have 15 apps opened concurrently. There is no sign of slowness until I open the Traveler app (the 15th opened app) that came with the phone. From there on, the screen froze with a never ending “Please wait” loading bar.

I’m more inclined to believe that this is more of an app issue than Nokia E7’s multitasking capability.

You can easily close any opened apps by tapping on the “X” button. Hold the button down a second or two longer and you will be presented an option to kill all opened apps.

To those who doubted the performance of a 680 MHz processor and a 256 MB RAM, it’s really not the figure that counts. It’s the actual performance.

Overall, I am very impressed with the multitasking capability of the Nokia E7.

p.s: Did not have the chance to capture a screenshot when I have 15 apps opened, the one above was captured earlier.